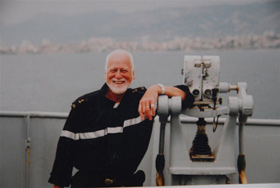 John Pendray was born in England. After graduating from Saint Martin’s School of Art, he became an art teacher in London. For eleven years he taught painting, sculpture, and ceramics.

In 1969 he left England for France where he worked in architecture and design. Among his most distinctive achievements are sculptures and frescoes for EDF, the state electricity and GDF, the gaz company, a mural painting, sculptures and chromatics for a nuclear power station, graphics for three underground stations in Marseille, sign postings for Sofia Antipolis and the Festival Palace in Cannes and various architectural graphics for major architects.

In 2000 he took French nationality.
In 2001 he was appointed Official Painter of the French Navy.
His work has been widely exhibited, notably at Salle Pleyel in Paris, at the National Maritime Museum of France, at the Monaco Yacht Club, the Yacht Club de France in Paris and the Maritime Museum of St-Tropez and in New York at Mark Murray Fine Paintings.
He now travels regularly with the French Navy to distant destinations : Solomon Islands, Sea of Oman, the Caribbean, Polynesia, Iceland…

His work is largely based upon these experiences with the French Navy and his own personal travels around the world with his wife to Viet Nam, Thailand, India, Indonesia.

Official painter of the French Navy

Cardinal Richelieu in the 17th century, appointed artists to paint the portraits of King Louis ships and to keep a trace of historical events concerning the royal fleet. In 1830 the French parliament confirmed the statute of Official Painter. The tradition has continued in France ever since.

Todays Official Painters (which includes also sculptors, photographers and medallists) are appointed by the Minister of Defense.
They hold the honorary rank oflieutenant or captain of corvettes in the French Navy. They receive no payment but are sent on missions aboard naval ships to all cornersof the world, witnessing and recording, each in his or her own way, the life at sea aboard a French warship and the maritime scenes surrounding them. They are integral part of the crew wearing on their uniform a small bronze anchor as a sign of their rank.
Their work can be recognized by the sign of an anchor placed after their signature.

Discover the official website of the Official painters of the French Navy.